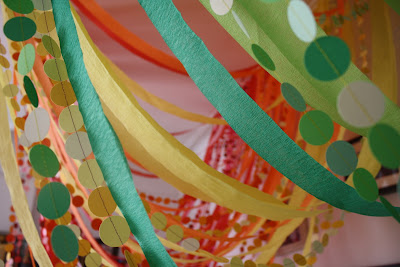 The idea of the ceiling instillation for Lindy and Javi's party came about because we had very limited space.  Due to budget, we were hosting the party in a 2-bedroom New York apartment, and with 60+ guests expected, we knew that every inch of floor space was going to be used.  Therefore, we needed something high impact, inexpensive, and in a spot where nobody needed to stand.

I have been really inspired lately by all the rainbow ideas over at Hip Hip Hooray, so once the rainbow confetti was in the invitations, I decided to go with that for the decor as well.  We decided on a swooping instillation of crepe paper and dot strings above the food table.  It was about 14 feet long and 4 feet wide.  The process took about 4 hours for two of us.  It was a fun, late-night, wine-drinking instillation: 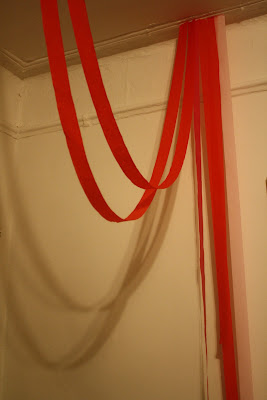 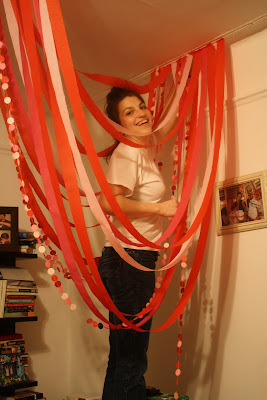 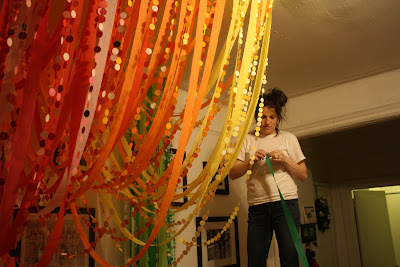 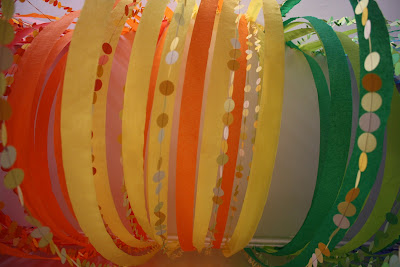 I think the finished product looks amazing, don't you? 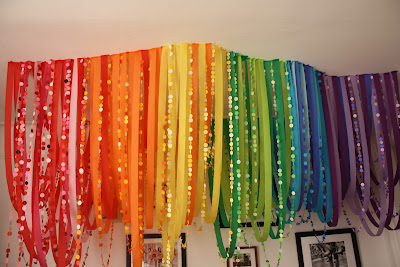 One of my favorite things about it, the wave design where it attaches to the ceiling, was actually a happy accident.  We finished the red and the orange when we realized that we weren't being careful about where the streamers lined up.  Instead of redoing, we decided to make it look purposeful, and I think the result is so much ﻿more interesting than it would have been otherwise.
Now.  About those strings of dots.  Believe it or not, those aren't sold anywhere, so we made them.  It was a long effort. We hand-punched each circle and then sewed them together with contrasting thread.  But the effort was worth it.  They look amazing.  They literally almost sparkled in a way I hadn't anticipated. 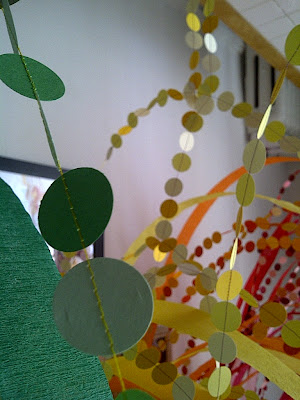 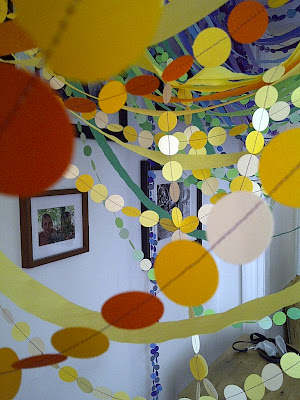 I think the key to the depth of this instillation was that for each color section (red, orange, yellow, etc.) we used an assortment of different shades in order to help us achieve the look we wanted.  So instead of just one color of red streamer, we used three shades, which included some pinks, and we even pulled in black to the confetti string as well.  For colors where there was only one shade (orange, for example- believe it or not, they only have on shade of orange crepe paper streamer), we blended in the occasional red and yellow streamer to give it depth.
The best thing about this instillation is that it looks amazing in pictures.  With flash, without flash, it created a phenomenal backdrop.  I think it would be beautiful at a casual and brightly colored wedding, don't you? 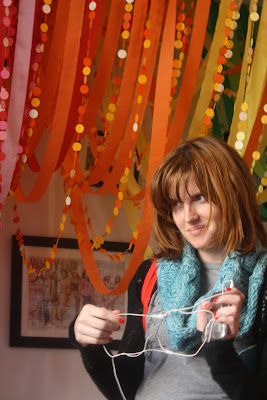 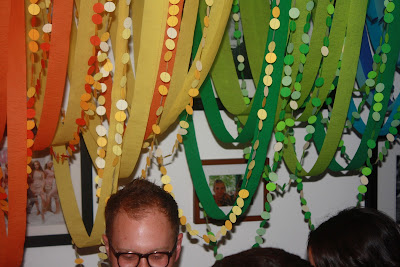 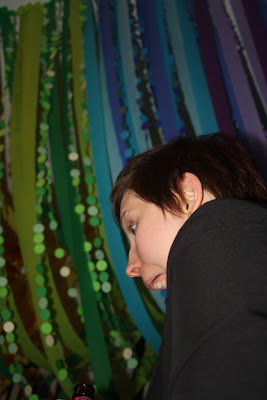 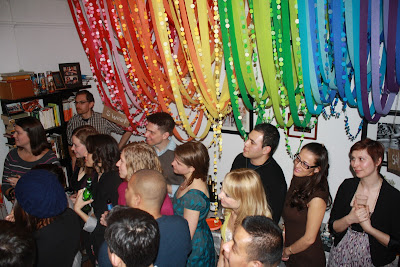 More party details to come tomorrow!
P.S.  The whole ceiling installation cost less than $40!  I bought the crepe paper streamers online at Zurcher's Discount Party Supplies.  They have a wonderful array of brightly colored streamers.
Posted by Janelle Holmboe at 7:14 AM

Janelle Holmboe
Longmeadow, Massachusetts, United States
I am the mother of two boys. Both my husband and I were born and raised on the West Coast. Three years ago, we moved to Western Massachusetts. I like to share our life and find special things to help enhance yours.

Other Blogs to Love